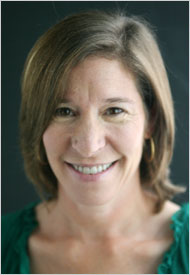 Occasional reflections on the admissions process by Caren Osten Gerszberg, the mother of a high school junior.

If I hadn’t been feeling anxious about my daughter’s departure to college — a whole year away — I’m beginning to now.

Almost everywhere I turn, around town, on Facebook, even in the movie theater, I hear the sounds, read the words and see the faces of emotionally charged parents preparing for the big day — the college send-off.

“Anxiety level is getting high: taking my son to college on Wednesday. He seems fine. I’m a wreck,” read one friend’s Facebook post.

“Three weeks from today I will be driving my daughter to college. Three weeks ago today, I could have sworn my dad dropped me off?” stated another.

And an e-mail came through with, “I’m just in denial that she’s leaving — which is not such a bad place to be … at least for today.”

In darkened movie theaters, mothers are wiping their tears during “Toy Story 3,” as a grown-up Andy gets ready to leave for college and part with his arsenal of stuffed dolls and plastic spacemen. And throughout the film “The Kids Are All Right,” references are made to the coming college drop-off of Annette Bening’s and Julianne Moore’s daughter. When that scene finally arrives, the farewell embrace à trois lasts so long that I just couldn’t help but identify … and cry.

Normally, I’m O.K. about saying goodbye. Just this summer, when the bugle sounded, announcing an end to parent’s visiting day at my son’s sleep-away camp, it was a hug, a kiss and “See you in three weeks. Love you.”

While I didn’t much miss the sound of video games streaming from our basement, the tennis balls pounding against the garage door, and the baseball mitt taking up space on the kitchen counter, I knew — and loved — the fact that those trivial annoyances would be back come mid-August.

But a child’s leaving for college is a goodbye of different proportions. Of course she’ll come home for vacations and maybe summers, too. Of course, her room will remain intact with its photos, yearbooks, etc., so it’ll feel like she still lives there. But does she? I’m not so sure it’ll ever feel quite the same.

When I returned home from college my freshman year, I remember feeling a bit put off, as if my parents were encroaching on my new-found independence (in retrospect, I don’t think they were). Although I loved being home and relished the familiarity and comfort of mementos and home-cooked meals, it felt more like a way station — a place to soak up parental love and good food until I went back to my current place in the world. College. Life away from home.

The other day, while at Bed, Bath & Beyond, I observed some college-bound kids and their parents — the interactions, bickering, even cajoling, as one boy convinced his mom he really needed that blender for making smoothies. Pads with the tear-off “College List” were posted everywhere, and for a fleeting second I considered grabbing one to show Nicole, but held back. We are not there yet, and I refuse to rush it.

I do wonder how I’ll handle the state of affairs come August 2011, when I’m the one maneuvering the cart through Bed, Bath & Beyond, and it’s my child who’s selecting a comforter and stocking up on hangers.

Will I be able to keep it together — like I did at the end of camp visiting day — and not prolong the goodbye? I’m not sure. But upon her leaving, I’ll try to be pragmatic, fighting off the anxiety with distractions, like work, exercise, and the two other kids, husband and dog I live with. Beneath it all all, though, I’ll be excited. Because despite her moving out, she’ll be moving on to the beginning of one of the most exciting chapters of her life.

Reprinted from The Choice Blog